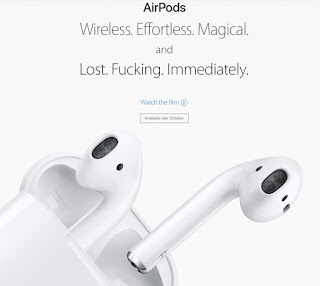 I didn’t want to like the Apple AirPods. I thought they looked stupid, and overpriced.

But I succumbed, and bought a pair last week. Man, the pairing is magical, and the simplicity of switching from two buds, to a single bud, back to two buds, is amazing.

There are some snags; it doesn’t as magically pair to my MacBook Pro, but between iOS devices its absolutely seamless. Very neat!

On to sound quality; I’m afraid its not all roses in this department. Muddy, too much mid-bass, not enough treble. Audiophile ? Nope. You can see someone in the Beats department was doing QA.

Update: about a month later, still LOVING them and they’re in use daily. Sublime!

Update3: My wife thinks they look crap, but agrees that paying double for the B&O’s is extravagant.